Dream on.....or is he judging others by his own standards... 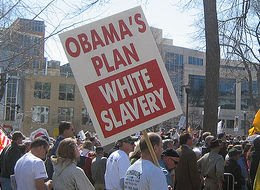 This chap is just dreaming...or is it nightmaring?
Posted by yam-yam yemeni at 10:56 No comments:

Berlusconi to Queen Elizabeth of England: Ah, Shaddup you face! 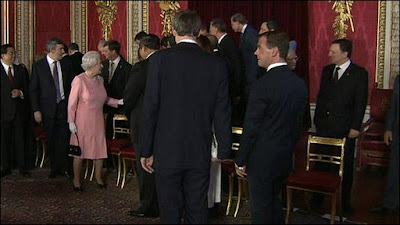 In light of the British media’s bedlam over the mannerisms displayed at the G20 photo shoot in London, Italian President, Silvio Berlusconi, has defied protocol once again and ordered the head of the British government to “Shaddup you face!”

Furthermore, to substantiate his demand, Berlusconi then cornered the Queen and asked which countries of all those Britain occupied, ransacked and pillaged have been compensated. The Queen responded in kind, (while wearing a crown full of looted jewellery, allegedly including a stolen ruby from the Punjab): “Mr.Berlusconi, your grammar is inappropriate to one’s ear holes.”

“Shaddup you face,” retorted Mr. Berlusconi, “we Italians occupied Libya for 40 or more years and last year we acknowledged that we did a wrong and compensated Libya. I put it to you Queeni, which countries have you ever compensated?”

“Oh do please grow up Mr. Berlusconi, and why do you have to talk so loud?” replied the Queen.

“Why you look-a so sad,” retorted Berlusconi, “my government is a government which acknowledged that it did a wrong to a nation and we compensated. You are not better than me!”

Queen Elizabeth totally ignored him, but Mr Berlusconi went on to say that he is going to release a new single next week, which will be his response to the British establishment's recent outpouring of cant against him. The song is also a tribute to Joe Dolce. The Chorus will include the following lyrics:

Why you looted the whole world, hey, gotta a no respect

Why you look-a so sad, hey, you’re the real gangsters, hey

London Daily Telegraph to Obama: Britain is America’s No.1 European client and don’t you forget it or else...no joyous pomp!

The London Daily Telegraph is the highest selling daily newspaper in the UK. It is read by the upper echelons of British society including a good proportion of ex-high ranking army types. The paper is written for people with power, by people who were educated in the breeding schools of power.

Yet last week, on the morning after President Obama arrived in the UK for the G20 summit, it treated its readers to an inadvertent 1st April fool day joke of an editorial in the print edition of the paper. It was such a verbose lark, albeit a posh one.

It first of all, commented on the near contemptuous disdain that the President Obama exhibited for the British Minister upon the latter’s recent visit to Washington or to put it in posh-boy Telegraph speak, it was “...perfunctory, bordering on the dismissive.” A sort of post facto – “how dare that wog of a President of America treat Great Britain in this manner!” But why should the President of “Change” treat the man who bankrolled the British end of the illegal war on Iraq – a war Obama called “dumb” and “not based on reason” - as anything else?

The fact also that Obama, as a person, has every reason under the sun to despise the UK totally eludes the silver spoon fed, has-been imperialist, of the average Telegraph editorial writer. Putting aside that his own grandfather was tortured by the British in Kenya, the entire Kenyan population, not just the Mau Mau, brutally suffered at the hands of the British in the 1950’s, a period, incidentally, when the current Queen of England was in the early years of her reign. This brutality included the forcible relocation of over 1.5 million Kenyans into concentration camps and no one in the UK and I mean no one, had the morality to bat an eyelid. Professor John Newsinger, a British historian, refers to the British public and media’s response British barbarism in Kenya as “muted”.

According to the academic, Dr.Laleh Khalili, the methods used to crush the Mau Mau were first employed by Britain to crush the Palestinian uprising against the British mandate between 1936-1939.

Returning to the Telegraph editorial, it goes on to warn Obama, not to make the mistake of some past Presidents (without mentioning who), that is “to treat the United Kingdom as simply another EU country.” You see, the United Kingdom is a lot more than say France and Germany, countries which did not unsolicitidly join and provide, “coalition of the willing” legitimacy for the Bush regime in its illegal invasion and brutal destruction of Iraq.

Obviously, there will be an immediate reward for Obama’s correct behaviour this time round. The land that gave America, inter alia, Willie Lynch, will allow Obama to return to the UK, “...in the near future for a proper state visit to enjoy the pomp and circumstance...”

Maybe President Obama could agree to this pompously empty and superficial state visit on the condition that the British Government will provide a full hearing to the Kenya Human Rights Commission campaign to claim reparations for the surviving Mau Mau for atrocities committed against them by Her Majesty’s Government in the 1950’s. 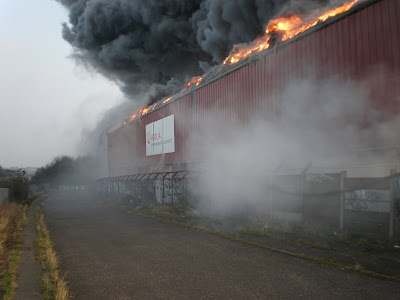 Can the person(s) who did this please own up!
Obviously someone who never understood the meaning of 'matches, matches never touch, they can hurt you very much...' has been taking unadvised and illegal initiative.

As we all know sabotage is not acceptable and neither is empty headed vandalism.

Whoever the culprit and whatever the intention, should not allow anyone to forget that Veolia is a 'complicit' company in the further dispossession and occupation of Palestine. According to the Palestine Solidarity Campaign's BiG website: "...with its involvement in this project, the company is directly implicated in the Israeli occupation of Palestinian territory and is playing a key role in Israel's attempt to make its annexation of the Palestinian territory of east Jerusalem irreversible. As a willing agent of these policies, Veolia is undermining any chance of a just peace for the Palestinian people."

Veolia, deducing from the above, is assisting the Israeli government in building a light railway system in occupied east Jerusalem to help facilitate the transport of goods and services to and from the illegal settlements in the occupied West Bank. This is in direct contravention of the 4th Geneva Convention, - "The Occupying Power shall not deport or transfer parts of its own civilian population into the territory it occupies."

Does this Convention (and countless UN resolutions) mean anything to Veolia? And if it did, why does Veolia continue to work with the Apartheid Israeli government? Yet certain West Midland councils are still pouring millions of pounds of taxpayers money into Veolia. The photograph above was taken Saturday last in Birmingham UK and our firemen did their honourable duty. 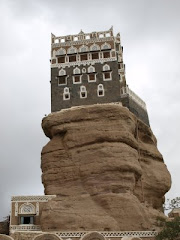 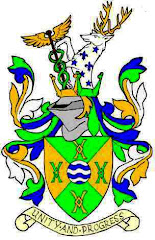